South Carolina’s teams won’t finish their regular season until Valentine’s Day weekend, and the next step in SC, as always, will be the state playoffs because South Carolina seeds its state tournament with regular-season region standings, skipping region tournaments altogether.

But for the area’s Georgia based teams, the regular season has ended, which means this week’s region tournaments will decide which teams will advance to the GHSA state playoffs, what seed they will earn, and, unfortunately, which teams will see their season end over the next few days. Here are the details for the tournaments we will be watching closely:

Grovetown’s boys and girls teams captured the regular-season championship and with that the top seed and a bye into Thursday’s semifinal round at this week’s tournament at Evans. The second seed, which is Evans on the boy’s side and Heritage for the girls, will also bypass Tuesday’s quarterfinal round. As is the case in all of the regions, the top four teams are guaranteed a spot in the state playoffs, but these four teams still have plenty of work to do this week because the region tournament champion and runner up will start their state playoff run at home, while the third and fourth place finishers will hit the road come playoff time. 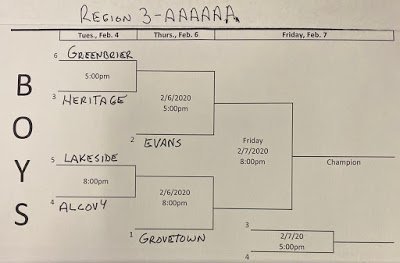 Grovetown (9-1 in the region), Evans (8-2) and Heritage (4-6) can all be seen as equally likely to leave Evans with the tournament crown and the region’s top seed in the state playoffs because every time those teams met head-to-head during the regular season the game was a toss-up. But don’t count out the bottom three teams because Lakeside (3-7) and Alcovy (4-6), which will play for a semifinal birth tonight, both have the talent to come out on top on any given night. And Greenbrier (2-8) has already beaten Heritage one time this year, which should give the Wolfpack confidence going into today’s quarterfinal matchup. 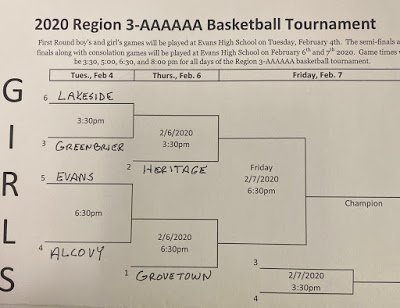 Like his head coaching counterpart Darren Douglas at the school on the boys side, Grovetown’s George Dukes claimed a regular-season region championship in his first season at the helm. Grovetown’s only loss in league play came against Greenbrier (6-4), which, like Grovetown, has a roster full of promising young players.

Tournament host Cross Creek will supply the field’s top seed on both the boys and girls sides after an 8 game regular season schedule in which Cross Creek, Burke County and Baldwin all threatened to take the top seeds. On the boy’s side, the Razorbacks won the regular-season championship outright by posting a 7-1 record, while the girl’s field actually ended in a three-way tie that tilted in the Lady Razorbacks’ favor after a coin flip tie-breaker.

On the boys side, Glenn Hills (14-2) and Butler (13-3) claimed the #1 and #2 seeds, and along with that two of the four semifinal spots in Thursday’s round. Again, that means automatic state playoff tickets. But those same two teams finished last regular season in those same two positions a year ago, only to finish third (Butler) and fourth (Glenn Hills) last year before they both lost in the first round of the state playoffs. Six or seven different teams have the capability to get hot and win this tournament this week! 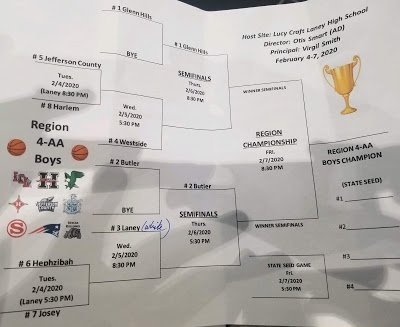 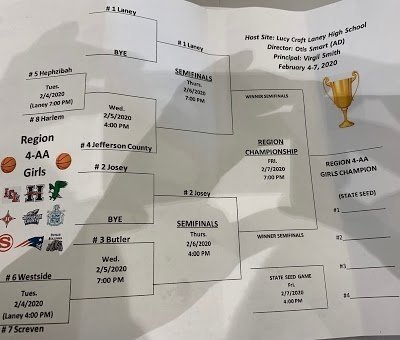