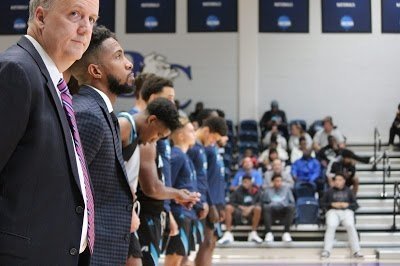 Freshman Lee Flenor got the “chest bump of the game,” which Augusta head coach Dip Metress gives to one player after every road win, after Flenor injected some needed scrappiness into Saturday’s second half against Barton, sparking a 25-8 run that stretched 8 minutes and propelled the Jaguars to an 88-85 win in its second of two 45 Second Classic season opening games at Barton College in Wilson, North Carolina last weekend.

During Augusta’s pivotal second half run, Flenor scored 8 of his 12 total points and grabbed 6 of his game high 7 rebounds, including 3 on the offensive end that led to scores. Flenor capped the spurt by putting back his own miss while being fouled to give Augusta a 68-56 lead with 9:44 remaining.

Rafael Monteiro (18 points), Miguel Arnold (18) and Tyree Myers led Augusta in scoring. Monteiro, a preseason first team all Peach Belt Conference selection, made 6 of his 10 field goal attempts and all 5 of his free throws, capping an impressive first weekend for the senior, who scored 24 points and logged 11 rebounds and 4 assists in Friday’s 88-82 loss to Mount Olive.

Sophomore point guard Tyree Myers also turned in his second solid performance of the weekend Saturday, dishing 8 assists to go along with his 17 points after a 10 point, 9 assist outing Friday. Myers scored 10 points during the final 7 minutes, halting an 8-0 run by Barton after Augusta’s lead was cut to 4 with a shot clock beating finish high off the glass over the outstretched arms of a Barton defender that put Augusta ahead 72-66 with 6:17 remaining. Myers scored 10 of Augusta’s final 18 points and made all 4 of his free throw attempts in the final 30 seconds while the Jaguars nursed a two possession lead.

Myers and fellow sophomore Miguel Arnold helped keep Augusta within striking distance throughout the first half. Arnold scored 11 points on 4-7 field goal shooting (3-6 from deep) during the first 20 minutes. And it was during that time when Myers tallied 7 of his game high 8 assists.

Augusta also benefited from timely shot making by junior Troy Cracknell, whose three pointer from the right wing with 16:40 remaining tied the game at 44. Cracknell later nailed a pull up jumper on the left wing that put the Jaguars ahead 54-52 with 13:25 left.

Cracknell scored 9 points on 3-6 shooting after netting 16 in Friday’s game. Factoring in the contributions from sophomores Darren Lucas-White and Tyshaun Crawford reveals that seven different players scored at least 9 points in one or both of the weekend’s games.

Saturday’s performance an improvement over Friday’s

Despite that realization, Metress was noticeably frustrated after Friday’s 88-82 loss to Mount Olive, and he was particularly displeased with his team’s 19 turnovers. Despite shooting 47% from the field and out-rebounding Mount Olive 46-35, the Jaguars were unable to overcome their sloppiness with the ball and hold on to the 1 point lead they earned with 4:27 remaining after battling back from down as many as 8 points in the second half.

But the transition from Friday’s turnover plagued opener to Saturday’s crisp outing (Augusta committed only 8 turnovers while shooting 53% from the field and 82% from the free throw line) had to qualify as a kind of sign that this season’s team is capable of making the progress that will need to be made for it to be able to approach the type of success that last year’s championship squad was able to attain. Here’s Dip Metress’s conclusion after Saturday’s win and the weekend’s split:

“It was a great win. Any time you win on the road, you should be happy. And it gives us something to build on. We’re still looking for identity. We really are.”

Augusta will travel to Claflin for another non conference game Wednesday before next Tuesday’s (November 19) home opener against Catawba.

Even with limited opportunities to take the floor and show off its high-powered lineup, the Jaguars are seizing each moment.

Chad Cook
Some of the links in our posts are "affiliate links". We may receive commissions for any purchases made through those links. Read our full affiliate disclosure to learn more.

To state the obvious, this is not a normal season in college basketball. Usually by this time, Augusta would have played 9 or 10 games and be into Peach Belt Conference play. Because of cancellations the last two Wednesdays and another this Sunday, the Jaguars might enter January sporting an undefeated record, but after only playing two games. That’s the bad news.

The good news is that even with limited opportunities to take the floor and show off its high powered lineup, the Jaguars are seizing each moment. Augusta’s two wins, both at home, have been double digit victories against stiff competition. Last Saturday’s 97-83 triumph came against an Emmanuel squad that was chosen by the Conference Carolinas coaches to win its league in their preseason poll. And Lander, who Augusta topped 87-72 on December 2, won the Peach Belt Conference tournament championship last season after finishing third in the regular-season standings (Augusta finished second in the regular season with a 16-4 league record.)

Augusta Moves Up in the National Rankings

The voters for the National Association of Basketball Coaches (NABC) NCAA Division II top 25 poll have taken notice by ranking Augusta #16 in the nation in the week-two installment, seven spots higher than in the week-one edition. Like the college basketball schedule, the NABC rankings are anything but normal. Ten of the top 25 ranked teams have yet to play a game, making it easy to understand why Augusta is moving up the ladder quickly with its pair of impressive wins.

During Augusta’s two victories, the veteran heavy squad has looked to be in mid season form, whether it be their shooting from the field, or their dominance in the paint. Three players in particular have produced eye popping statistics in the small sampling of action so far:

The 5-11 junior guard has scored 41 points in two games while shooting 55% from the field, making 7 of 14 three point attempts and dishing out 9 assists.

The 7-1 junior, who was voted preseason first team all conference by the Peach Belt coaches, has scored 39 points while making 15 of 19 field goals. Crawford also grabbed 17 rebounds and blocked 6 shots combined in the two games. He has also made 9 of 13 free throws, a marked improvement over last season.

Crawford’s fast start was noted in the NCAA’s recent account of its “all stats team”:

Lucas-White has stuffed the stat sheet from every angle during Augusta’s first two games, logging 40 points (73% FG), 13 rebounds, 8 steals and 6 assists. But Lucas White’s most exciting action might have been the one shown in the first clip of this video, which didn’t show up in the stat sheet. Watch below to see Darren hit the floor twice in one defensive possession during a second half stretch against Lander in which he completely changed the game with an exceptional display of effort and will:

In the post game interview below, recorded after Augusta’s latest win, head coach Dip Metress talked extensively about Augusta’s hot shooting and about Arnold, Crawford, and Lucas-White, as well as other impact making Jaguars. The video also includes a post game interview with Arnold and several clips from the win over Emmanuel:

From Augusta’s December 2 win over Lander, in which the Jaguars outscored the Bearcats 59-29 in the second half to turn a 15-point halftime deficit into a 15-point victory, below is the game’s video summary:

Gators Throw Away Playoffs with Bonehead Penalty for the Ages

Costing his team a chance at the CFP, Gators defensive back commits what may go down as one of the dumbest penalties in sports history.

Terell Baker
Some of the links in our posts are "affiliate links". We may receive commissions for any purchases made through those links. Read our full affiliate disclosure to learn more.

On Saturday, Florida Gators cornerback Marco Wilson, a third-year legacy player who’s widely regarded as the Gators’ best defensive back, committed what may go down as one of the dumbest penalties in sports history.

On 3rd and 10 with exactly 2:00 remaining in the 4th quarter, the Gators defense stuffed LSU TE Kole Taylor short of the line to gain. After setting up a punt to their offense, led by Heisman-trophy front runner Kyle Trask, the Gators’ celebration was cut short as Wilson inexplicably ripped off the LSU player’s cleat and threw it downfield.

After a momentary pause by the referees, who probably had to do double-takes in the dense Gainesville fog, the penalty flags rained down like so many alligator tears. The unsportsmanlike play gave LSU a first down, and set up a 57-yard field goal by Cade York with 23 seconds left in the game. Although Trask and the Gators would put together a few chunk plays on the subsequent drive to set up their own 50+ yard field goal attempt to tie the game, Evan McPherson’s kick skirted outside the left upright, ending the game, and probably Florida’s shot at the College Football Playoff.

Social media reactions were merciless with many bringing up Ole Miss receiver Elijah Moore’s infamous “dog-pee” celebration from the 2019 Egg Bowl. In that game, Moore’s unsportsmanlike penalty after a last-second touchdown resulted in the extra-point being moved back 15 yards. In a mystical display of instant karma, the Rebels would miss the kick and lose the game by one point. Fun fact: Wilson and Moore hail from the same hometown of Ft. Lauderdale, Florida.

Even former Gator greats were beside themselves as they joined the social media pile on:

The year started with Marco Wilson announcing his return to Gainesville for a third season. After starting as a true freshman and suffering an ACL tear early in his sophomore year, Wilson had contemplated joining the NFL draft. The decision to return for a chance at a championship looked like a great gamble for most of the year. But after being beaten repeatedly by LSU receivers on Saturday and then committing the horrible penalty that may cost his team a playoff berth, Wilson’s decision may turn out to be more ironic than heroic.

The Gators now turn their attention to next weekend’s SEC Championship Game against Alabama. It’s hard to imagine the Gators bringing the same energy into that game knowing that a win will likely still leave them short of the ultimate prize, a chance at the school’s fourth national championship.